Last week 15 staff and Board members of ALCOSAN took a two hour tour of the Negley Run Watershed to learn from residents why they are urging ALCOSAN to adopt a green first strategy for solving the sewage in the rivers problem – also known as the CSO problem. The tour visited a number of sites where the community has raised money for green investments and has installed green infrastructure. More importantly the tour went by areas of the Watershed where there’s a need for larger green investments that can help mitigate flooding, basements backups and where neighborhoods have not seen the transformation that green has brought to other parts of the watershed.

The tour comes at a time when ALCOSAN is preparing to sign a final consent decree with the EPA that will describe how the region will remove 10 billion gallons of sewage from our iconic three rivers. The current plan that ALCOSAN is working off is the construction of 14 miles of huge tunnels under our rivers. While these tunnels would solve the problem, they will not bring all the community benefits that a green first approach such as reduced flooding, neighborhood transformation and local jobs. The consent decree does contain language that allows us to swap out tunnels for a green approach if we can prove that green infrastructure works just as well as gray. 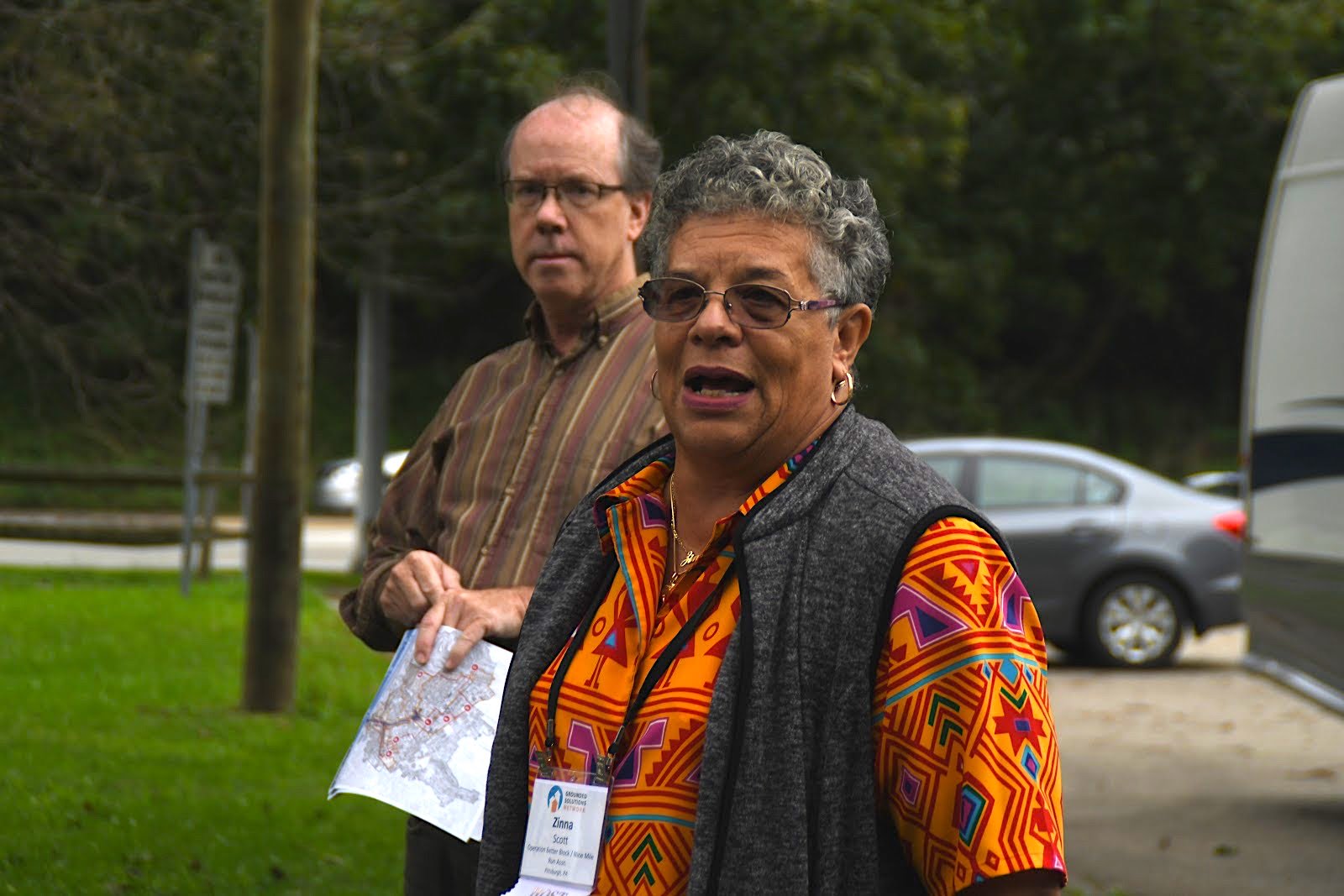 The tour mimicked how water travels in the watershed. It started at the Police Station on Washington Boulevard, the scene of deadly flooding over the years, and went to the top of the watershed. It made a quick drive by of Chadwick Park and stopped at Crescent School – both of which have green installations but still much more could be done. 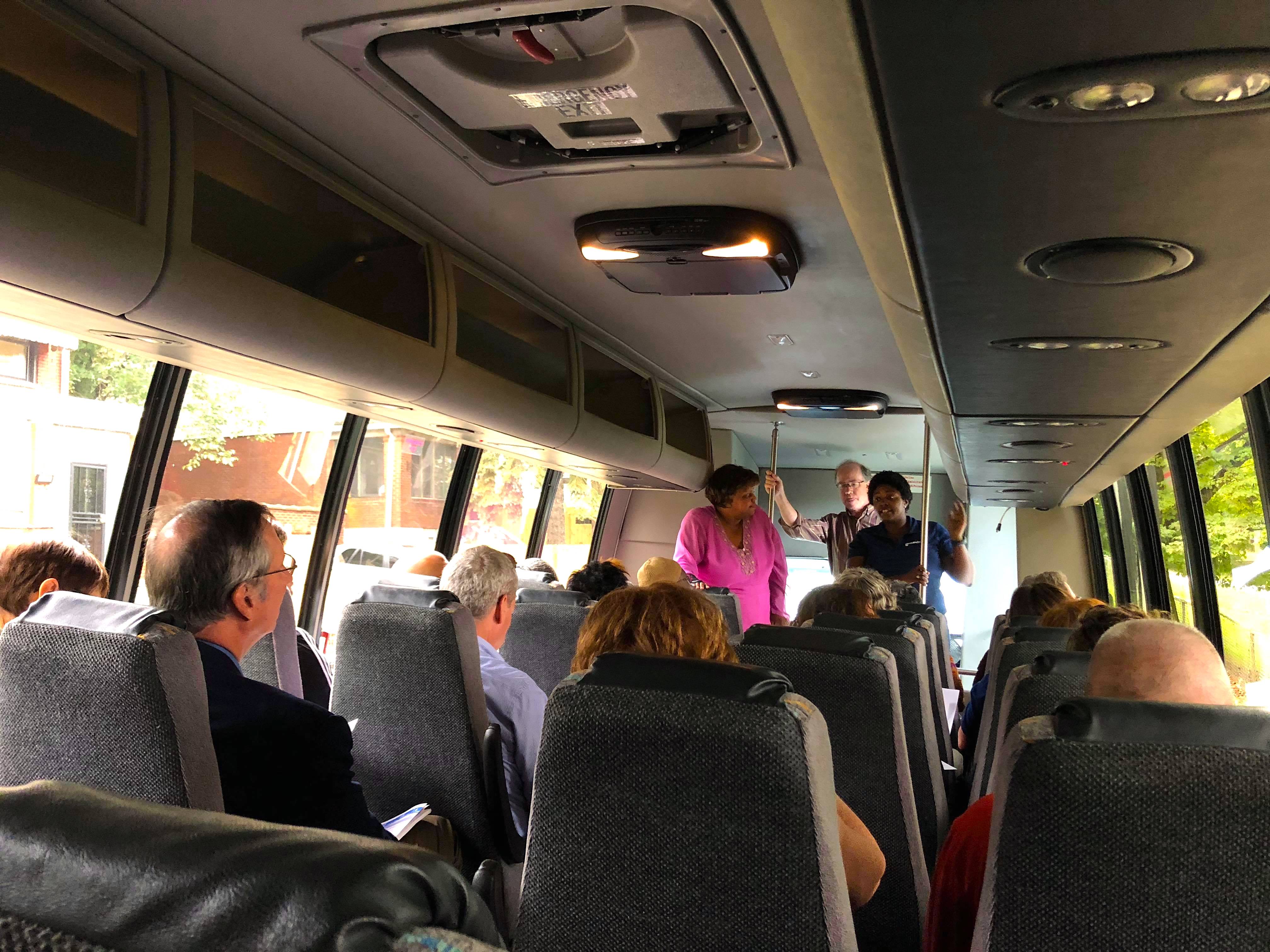 Ariam Ford and Dana Fowler speak to the group about Chadwick Park green projects on the way to the Crescent School.

On the way to the next stop at Homewood Library the tour drove on Finance Street where a row of new homes experience frequent basement backups and flooding. At the Library, the librarian described how their basement auditorium suffered over $100,000 of damage from flooding, highlighting the costs that could be saved with one green investment. 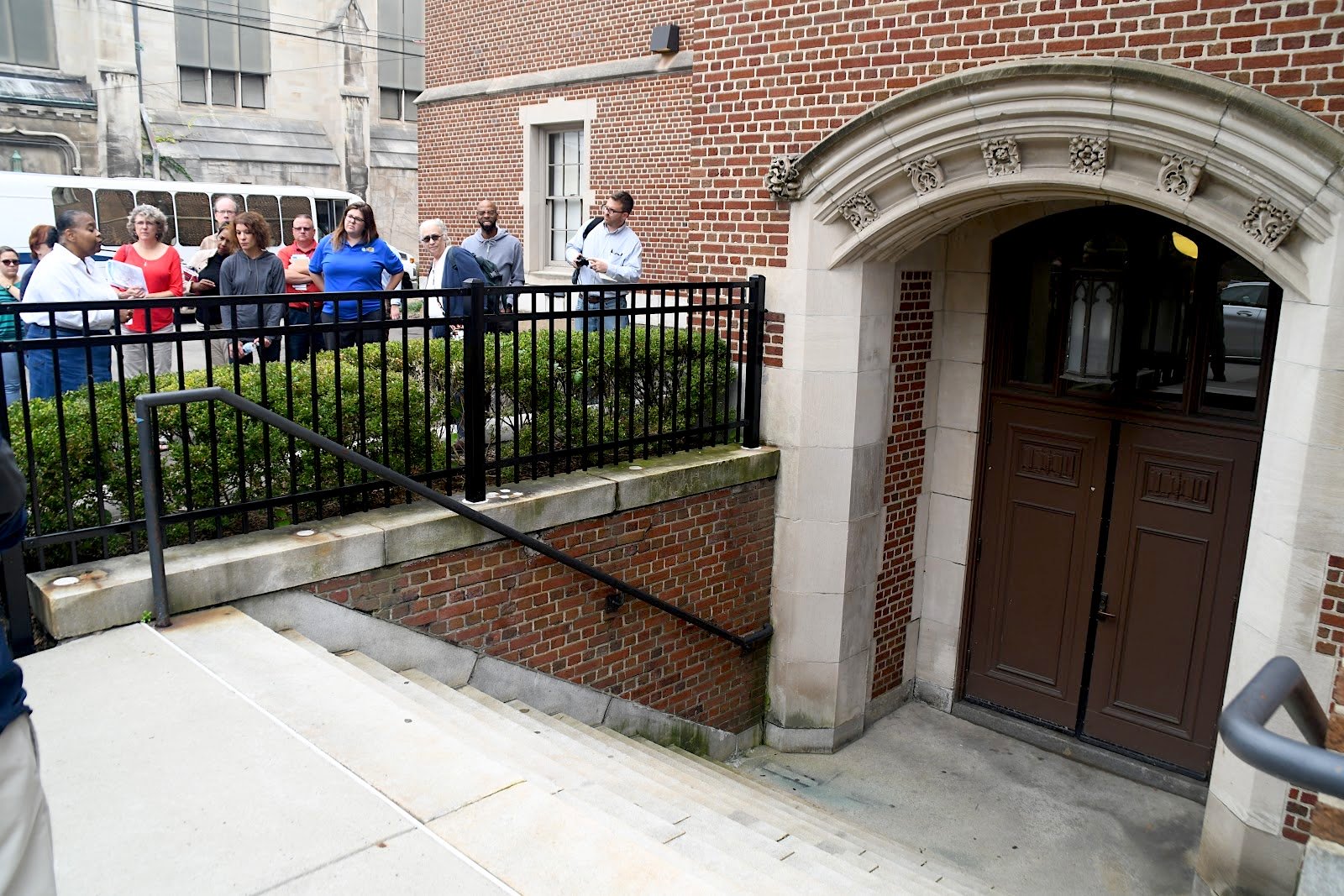 Denise Graham, Homewood Library Librarian explaining to the crowd how the basement of the Library frequently floods and causes costly damage. 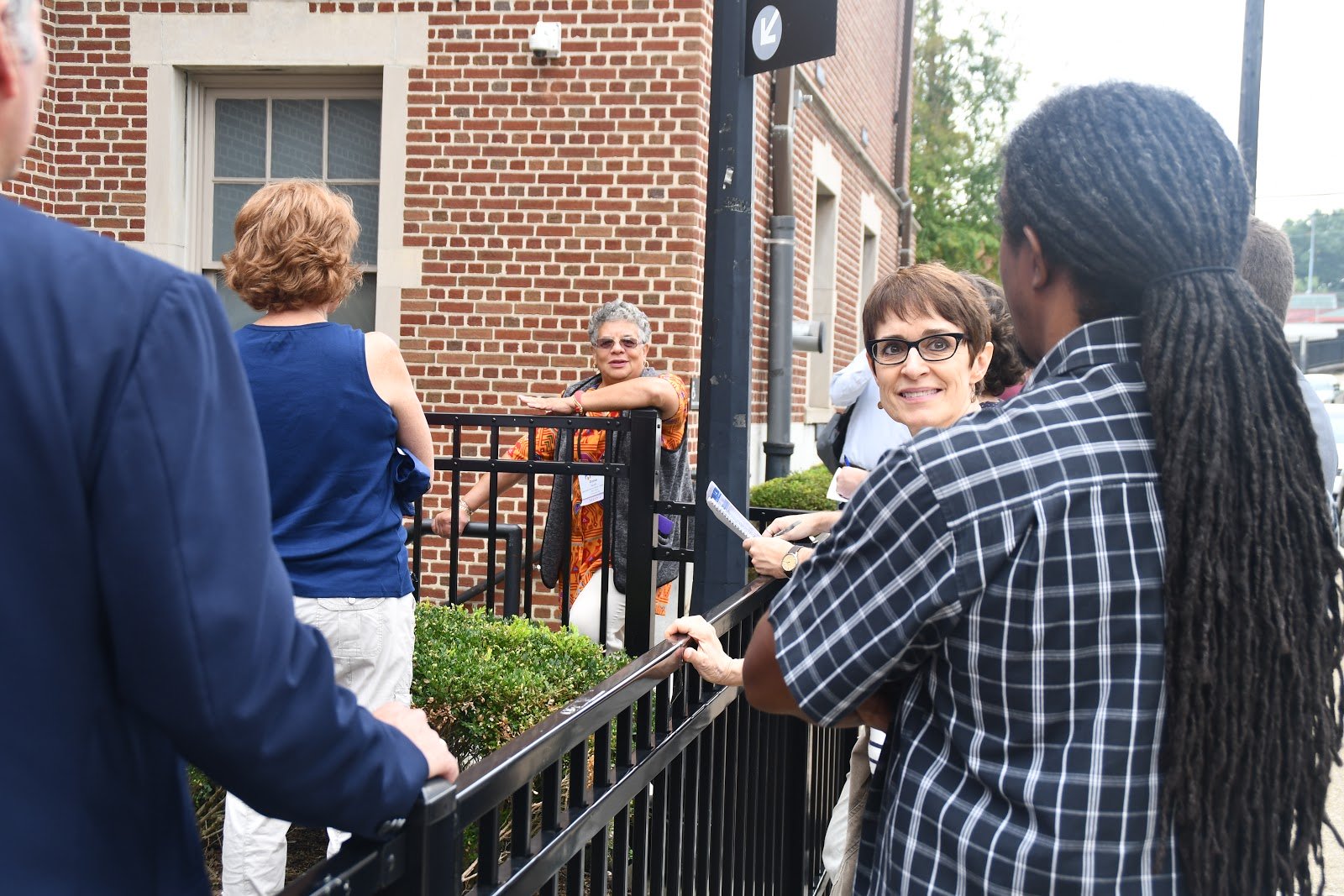 After the Library, the tour visited the EECO Center a net zero energy building with several green installations on the property. On the way back to the Police Station, a Highland Park resident described the flooding damage that her neighborhood has experienced. She asked ALCOSAN to take a green first approach so that residents’ money would get reinvested back in the neighborhoods of the region. In order to make larger green projects a reality, she said, projects like the large Negley Run project being led by PWSA need large scale investments from ALCOSAN.

At the end of the tour, the Negley Run residents asked ALCOSAN to do the right thing and go in a green first direction. Residents told ALCOSAN that it is their money that is being invested into fixing this problem and they want their money to be reinvested back in their communities through green infrastructure that comes with multiple benefits. 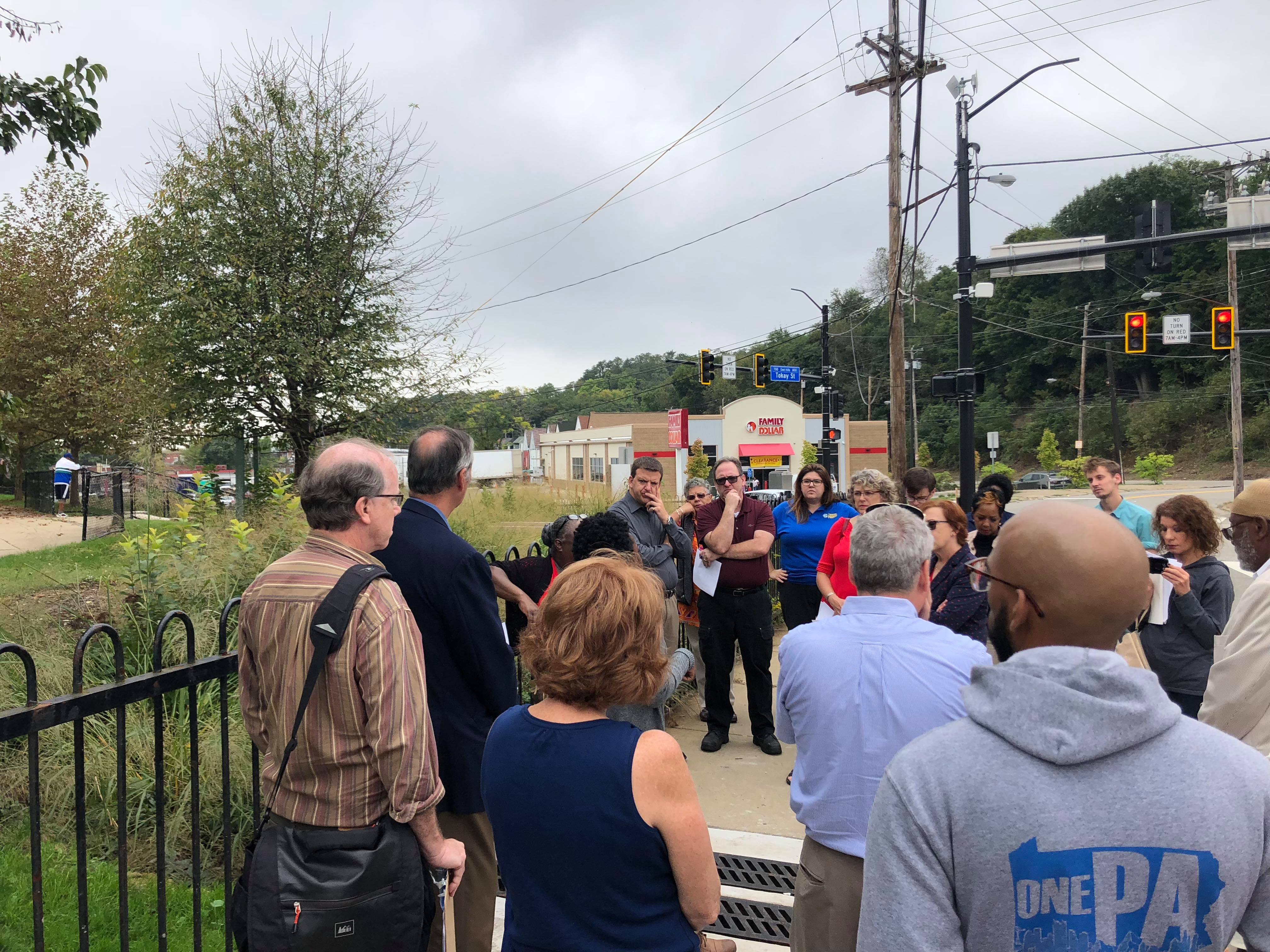 Tour goers learn about the grassroots project at the Crescent School.